Bihar School of Yoga is yogic system which has a goal to transfer teachings of classical yoga in accessible, practical and gradual way. It is a traditional yoga school based on the teachings and tradition of Swami Shivananda Saraswati, Swami Satyanada Saraswati and Swami Niranjanananda Saraswati.

Bihar School of Yoga was founded in 1964. by Swami Satyananda Saraswati in Munger, Bihar province, India. By spreading the ancient teachings of yoga, over the years,  it has become known, recognized and respected worldwide as the institution that has the highest standards in teaching yoga. 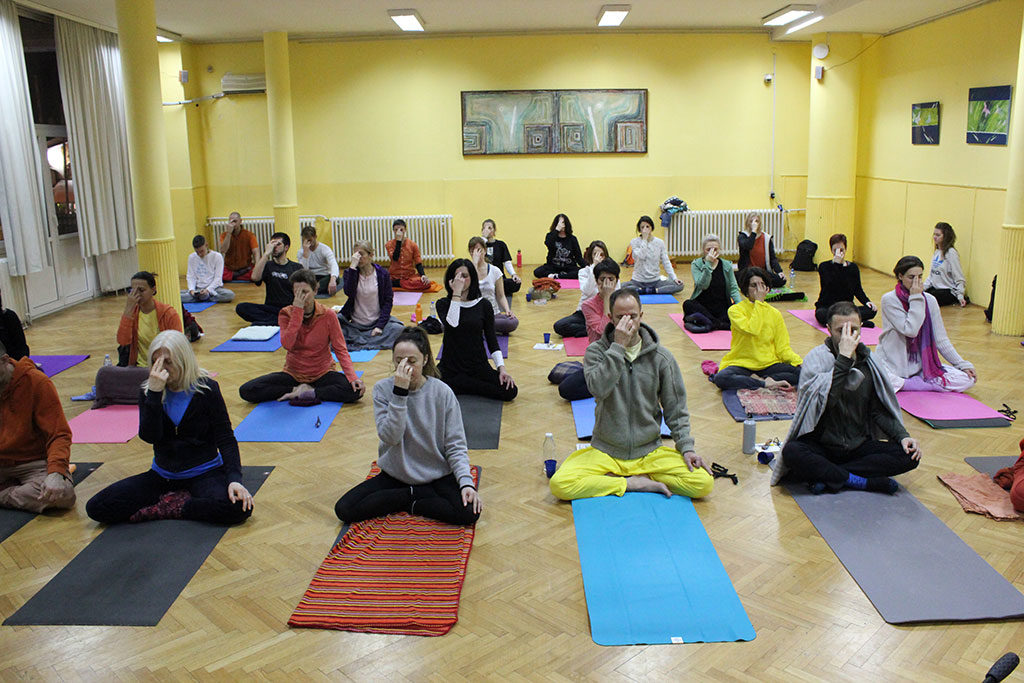 “Swami Sivananda was the best man I have ever met in my life. I have never seen Christ, but I have seen Swami Sivananda, and therefore I believe Christ must have existed” – Swami Satyananda

Swami Sivananda Saraswati was one of the great luminar­ies of the 20th century. He was born in Pattamadai (Tamil Nadu, India) in 1887. He was a renowned medical doctor in Malaysia. Having understood that medicine cannot solve the man’s deepest suffering nor causes of disease, he quit his suc­cessful medical carrier and embarked on searching a spiri­tual guide. He settled at the foot of Himalayas, in Rishikesh, where he engaged himself in intense spiritual practices and healing and helping the sick and poor till the last atom of strength. Around him was founded the well-known Sivana­nda Ashram on the bank of the Ganges River, and in the fol­lowing years he wrote several hundred books and articles on yoga and spirituality, aiming to present yoga and its value to a wider audience. In his work the emphasis was on breaking the barriers that existed between the timeless yoga teachings and all those who needed them. He promoted yoga as a tool for achieving better health, calming the mind or for spiritual development. This idea is still alive in Saty­ananda yoga system today. Swami Sivananda travelled intensively through­out India, inspiring millions of people to, as he would say, “live a divine life”.

Institutions left behind him are the Divine Life Society, Sivananda Ayurvedic Pharmacy, Yoga Vedanta Academy and Sivananda Charitable Hospital. Swa­mi Sivananda was a great spiritual enlightener of the 20th century who pre­sented yoga to the world as a practical integral discipline that anyone can use to improve their life. He was the embodiment of committed service to the beloved and an irresistible inspiration to everybody who came in touch with him. His eightfold path of spiritual development – “Serve, love, give, purify, be good, do good, meditate, realize”- today is a guiding map to spiritual aspi­rants across the world. He attained mahasamadhi on July 14, 1963.

“Rarely do people, especially so young, possess such deep vairagya or detach­ment. Swami Satyananda is full of Nachiketa vairagya. He works for four people and never complains. Whatever work he takes on he will do it per­fectly in every way. May God give him peace, prosperity, wealth and a long life” – Swami Sivananda

Swami Satyanada Saraswati was born in 1923 at Almora, at the foot of Himalayas, northern India, into a family of farm­ers. His ancestors had all been warriors and soldiers, the last one being his father who did military and police service. But ever since his childhood, it was obvious that Sri Swami Saty­ananda was of a different caliber, as his spiritual experiences started when he was six already. As a young man, despite having everything in a well-to-do family, he was searching for answers that were given to him together with an initia­tion by a tantric bhairavi Sukhman Giri. Having given him deep insights, she sent him to find a guru, a spiritual teacher, in order to stabilize his spiritual experiences.

In 1943 when he was twenty years old, he left his home in search of a guru. He met all the great spiritual teachers of that time in India, but it was only when he met Swami Sivananda in Rishikesh that he realized he found what he was looking for. Swami Sivananda initiated him into san­nyasa on September 12, 1947 at the bank of the Ganges River and gave him a spiritual name Swami Satyananda Saraswati.

For 12 years he was working, learning and serving his master in the ashram in Rishikesh. At that time the Rishikesh ashram was modest and the life condi­tions were very difficult. Many things from snakes, monkeys, and mosquitoes from the nearby jungle, to fetching river water, made life hard and difficult. That was the time of selfless work and service to his spiritual master and the time of discovering all aspects of spiritual life. With time Swami Satyananda became an authority in the areas of Vedanta, tantra, yoga, philosophical sys­tem Samkhia and kundalini yoga.

When the twelve traditional years of Guru’s teaching went by, Swami Saty­ananda left the ashram and travelled all over the globe meting people full of pains and worries. He realized that the world didn’t need the sublime phi­losophy of Vedanta, but practical application of an ancient system of yoga based on scientific principles. In 1956 he founded the International Yoga Fellowship Movement (IYFM) and Bihar School of Yoga (BSY) in 1963. In the following twenty years Swami Satyananda was passing the message and knowledge of yoga to every nook and cranny and made Bihar School of Yoga the most eminent yoga institution in the world. He wrote more than eighty referent books on yoga, tantra and spiritual life. To coordinate yoga research and scientific work, in 1984 he founded the Yoga Research Foundation. In the same year he founded Sivananda Math, an institution that helps poor and underdeveloped strata of society. At the peak of his accomplishment, in 1988, he left the institution of Bihar School of Yoga and renouncing all the rights and commitments and embarking on a new phase of his mission, that of a spiritual ascetic and paramahamsa sannyasin. From 1989 he lived in seclusion in Rikhia, a small village in the canter of the poorest part of India, doing high Vedic spiritual practices. In time, around him was formed a new intuition, Rikhiapeeth, which has been helping 65000 inhabitants of under­developed countryside in the region. From 1995 to 2007, he was doing an ancient Vedic sadhana, Rajasuya Yagna, with sankalpa or spiritual resolution for peace, wellfare and prosperity of all people. This massive event attended by thousands of people from all around the world each winter has changed their lives for the better. On December 5, 2009, Swami Satyananda attained mahasamadhi, or yogic realization, by consciously allowing the life processes to be silenced forever.

“Swami Niranjananda has given up everything for the wellbeing of human­ity. He is my spiritual successor because he is able. I chose him when he was four years old and taught him although I have never told him he would be my successor.” – Swami Satyananda

Swami Niranjanananda Saraswati (Swami Niranjan) was born in Rajnandgaon, India, in 1960 in a family commit­ted to yoga and their guru Swami Satyananda. At the age of 7 he joined Bihar School of Yoga in Munger, and at 10 he was initiated in sannyasa. As an eleven-year-old boy he set out on a journey and travelled all over the world, from Europe, over South and North America to Australia, teaching yoga and assisting in opening yoga centres. At the age of thirty he was initiated into Paramahamsa San­nyasa, and in 1993 he was appointed a successor of his guru Swami Satyananda.

Swami Niranjanananda started running Bihar School of Yoga in 1983. He founded the institute for advanced yogic studies named Bihar Yoga Bharati in 1994. He is a source of infinite knowledge in the areas of yogic philosophy, practice and lifestyle. He has written many books in the domains of classical yoga, tantra, Upanishads and philosophy and made many tours across India and abroad giving practical guidance and inspira­tion in how to live a yogic lifestyle, how to develop spiritual awareness and unite the hands, heart and head through integral Satyananda yoga.

In 2009 Swami Niranjan started a new chapter in his sannyasa. He handed down his duties in administering Bihar School of Yoga to the next generation and quit travelling around the world in order to settle down in Munger and dedicate himself to the role of guru and spiritual leader, while being more available to people.

Serbian Yoga Union brings together several yoga centers, a large number of yoga teachers and many students, followers and admirers of the Bihar School of Yoga, which is the inspiration of the SYU and is headquartered in Munger, Bihar province, India.